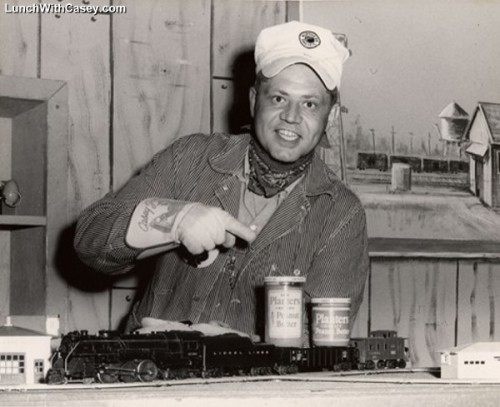 It’s now been ten years since Roger Awsumb passed away, and yet, Casey Jones lives on in the hearts of all of those that grew up watching him.   “Casey Jones, now arriving on track 11,” was part of the familiar show opening as we would sit down with our peanut butter and jelly sandwiches to watch Casey and Roundhouse.   Each day Casey would bring us cartoons and music and fun guests.

I’m very grateful that I got to know Roger as both a young boy watching him on TV, and as an adult running this website.   Visiting the Lunch With Casey show was one of those great moments that I never forgot.  It was my first exposure to a television studio, and it was magic that pointed me to my career in the broadcast industry.   Many years later I was able to return that favor when Roger came through Atlanta and I gave him a tour of CNN, where I was working at the time.

This website has it’s origin in a posting I made back in August 1996 on the rec.arts.tv newsgroup.    You can still read my post in the Google Groups archive.   After that, someone sent me a scan of one of the Casey postcards.  I put the photo and my post together and created a little webpage on AOL.   A year later I mailed Roger a print out of the website and he called me up.  He sang me the Happy Birthday Song.   I was a little kid all over again.   We talked every couple months after that.

Roger passed away on July 15, 2002.   It was a very difficult time for me as it came two weeks after my mother died.   But life goes on and ten years later, the Lunch With Casey site is still a place where fans can come to remember Casey and Roundhouse.

We miss you Roger.   Thank you for all the wonderful times.