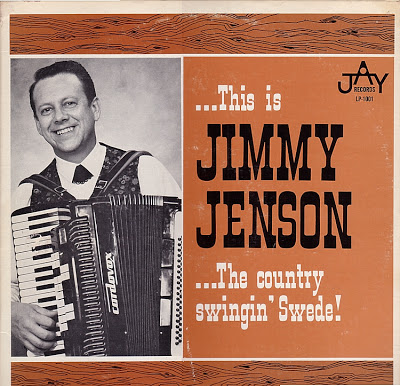 Jimmy Jenson, known as the “Swingin’ Swede,” passed away on August 7, 2015 at the age of 84.    Jimmy is best known to fans of Lunch with Casey for his rendition of “Walking in My Winter Underwear.”    Roger Awsumb, as Casey Jones, would lip sync to the song in a popular clip from the television series.

Jimmy was a popular performer in the Midwest, mixing Scandinavian humor and song parodies, accompanied by his accordion.    He started his career performing as a child in Detroit Lakes, Minnesota.   He played dances, performed on the radio, and later television in Fargo, Moorehead and the Twin Cities.

He recalled being in the studio when Casey taped the classic performance of “Walking in My Winter Underwear,” as well as “Jingle Bells.”   He remembers Roundhouse pulling Casey in a sleigh while he threw fake snow on the two of them.  Unfortunately, that clip of Jingle Bells is long gone, but we still have this favorite:


Jimmy continued to entertain to the end of his life.    He loved performing gospel music and recorded  several CD’s of Christian music, as well as releasing his classic recordings.    He is survived by his family including 16 grandchildren and great grandchildren.    His daughter Suzanne said he had a wonderful life with his wife Helen.

Here are a couple other songs…