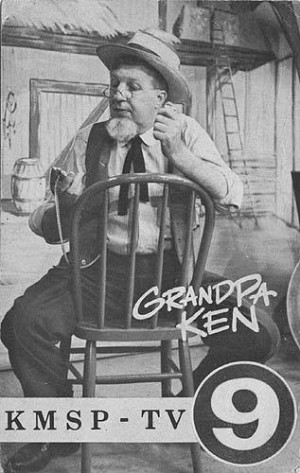 Ken Wagner brought the Captain Ken show to KMSP in 1960.  The show started in Davenport Iowa in the early 50’s.    The show changed formats in 1967 becoming Grandpa Ken and continued until the early 70’s.

You can read more about Ken Wagner on the Captain Ernie’s Showboat website.

Jack Kennelly was kind enough to share this interview with Ken Wagner:

The year is 1972, I am journalism major at Mankato State College. As a term paper for a Mass Communications Class, I decided to focus on children’s television and interview Ken Wagner, known to area kids as GRANDPA KEN. What follows is a summary of that paper.

On January 29, 1972 I interviewed Mr. and Mrs. Ken Wagner of Rosemount, Minnesota. Ken Wagner is known to area children as Grandpa Ken, host of his own television program.

When the character arrived in the Twin Cities in 1960 he was Captain Ken, the captain of a Mississippi River Showboat known as the Dixibell. With the Captain were his puppet friends – “NO NAME” the dog, PEEWEE the clown and CALLOPIE the turtle. He and his puppets entertained children in the studio and at home with puppet shows, cartoons, art lessons and games. He is   also known for “THE WIGGLIES” where a member of the audience came up to the drawing board and takes a marker and draws anything. Captain Ken then made a picture out of the scribble. (Like many local kid’s shows, Captain Ken made a yearly visit to the State Fair. I recall his show being performed in the corner of the lower level of the Grandstand.)

Three years later the character of Captain Ken retired and moved to a cottage by the River and became known as Grandpa Ken. Children no longer appeared on the show.According to Grandpa, the change made him more versatile and he was able to convey a more homey character. He also said, “When I was Captain Ken, many adults called me Captain Kangaroo.”His program airs live Monday – Friday at 8:30 a.m.

When I asked Mr. Wagner about his training he said, “The world of experience…people learn by doing”. After high school he worked at theatres in Iowa creating display ads. He wanted to own his own movie theatre and his dream came true with the purchase of the Wilton Theatre. During 1949 television arrived and Ken, always an artist, noticed the artwork on television was poorly done, so he designed a call letter board for an area TV station. He then became art director and the host of a weekly program called COMIC CUTUPS. From this program developed the CAPTAIN KEN show. In 1960 Twin City kids host Dave Lee left his program and Ken Wagner was hired.

Besides hosting the show he is an artist and working on a series of children’s books. I asked Mr. Wagner what he tries to teach kids….”I attempt to teach the tadpoles (the word he uses for kids) about the world, kindness and the nice things of life.” There is no violence in his show. He does strive to bring out the artistic abilities of kids with weekly art lessons.

I somehow feel Mr.Wagner’s entire philosophy of television and life can be summed up in the ending quote of his program… Keep smiling and make others happy, I will see you tomorrow.