The 1950’s and 60’s were a special time for children in Minneapolis, Minnesota. Each day there was a kiddy television show called Lunch With Casey. It featured Roger Awsumb as railroad engineer Casey Jones and aired on WTCN channel 11.

Roger Awsumb was born in Saint Paul, Minnesota on July 10, 1928 to Ardin and Petra Awsumb. He graduated from Central High School in 1946, served in the U.S. Army from 1946 to 1947, and graduated from Macalester College in 1950. He also graduated from Brown Institute in 1951. During his summer vacations from school, Roger shoveled coal in a rail yard, the only real connection he had to train work.

Awsumb began his broadcasting career in 1948 as an announcer at WBOM at Macalester College in Saint Paul, where he later became program director and manager. In 1951, he became announcer and program director at KDLM – Detroit Lakes where he hosted a children’s show, and created the character that became Casey because “kids love trains.” 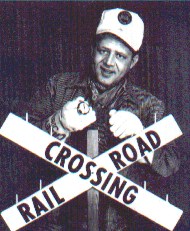 He moved to television in 1952, joining WCCO TV as a floor man announcer and director. John Gallos (Clancy the cop) gave him his first job as a floor director at WCCO. He took a similar position at WMIN TV in 1953

In May 1954, he began appearing on television as “Casey Jones” a railroad engineer on WMIN and WTCN TV (now KARE TV). Casey invited children to join him for lunch, skits, songs and cartoons. In addition to playing Casey, Roger also directed and produced Tel-a-Story Playhouse, Romper Room, and the Mid-Day Movie.

The show ran on channel 11 in various incarnations until 1973. In 1957 the show aired a noon as “Casey Jones and his Noontime Express.” In 1960, he aired opposite “Axel and his Dog” on WCCO at 5PM following Bandstand.

In the early days of the program, birthday greetings were read by a puppet squirrel named Tommy the Ticket Taker. 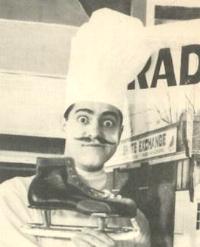 Joe the Cook had his own afternoon show called “Cartoon Carnival” and Roger would dress as Roo Roo the Kangaroo. Chris Wedes also played the character of J.P. Patches on WTCN. Joe the Cook continued to appear on with Casey until 1958 when Wedes moved to Seattle to host his own children’s show.

Another regular on the series was Chief Whitecloud who was played by Charles Herzog. Herzog worked at WTCN in 1954-55 in the control booth. As a lark he dressed up as an Indian and they put him on the “Sev Whidman show” where he became a regular guest. The show was sponsored by Northwood Milk Company who held a contest to “name the Indian.” A girl in St. Paul submitted “Chief White Cloud” this is how he got his name. He made a number of special appearances and was featured in the Aquatenial parade.

In the early sixties, another regular was a guy named “Cousin Lem.” 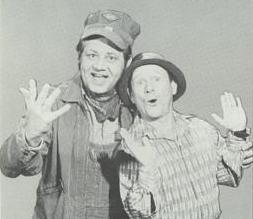 After Joe left for Seattle, Lynn Dwyer joined Casey as Roundhouse Rodney. Before joining Casey, Lynn has been a skater with the Ice Capades. Lynn appeared in many humorous bits dressing up as Lippy Lois, Jimmy Durante, and comical versions of Superman and Tarzan.

Daily highlights included a staple of cartoons (Loony Toons, Hannna Barbara) and Gumby. Each day Casey would have lunch delivered by a local restaurant like Shakey’s Pizza or even McDonalds. He would have guests like Bob Duerr, animal handler from the St. Paul Como Park Zoo, or musical guests who would entertain for a while. Gary McDonald has been kind enough to share photos from his visit to the set 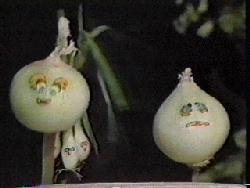 Occasionally they would also feature musical segments where Casey and Roundhouse would perform in what could best be described as early music videos. One that stands out was a song called “I Love Onions.”

Every year at Halloween, an evil witch would shrink Roundhouse and trap him in a pumpkin! I assume this was so Roundhouse would get a vacation! Just in time for Halloween, Casey would carve the pumpkin and rescue Roundhouse restoring him to normal size.

Lunch with Casey went off the air Friday, December 29, 1972. Chef Hank Meadows, Bob Duerr from the Como Zoo, Harmon Killebrew of the Minnesota Twins, and even Minneapolis mayor Charles Stenvig paid a visit. It was a sad day.

Lynn Dwyer went on as Roundhouse to have his own show on public TV in Minneapolis. Sadly, his career was cut short in the mid 70’s when he suffered a fatal heart attack while out jogging.

In 1984, Roger “retired” to the Brainerd Lakes Region where he joined the staff of KLKS Radio. He worked full time as a broadcaster with KLKS until 1993, and continued part time until his death. He continued to make public appearances around Minnesota as Casey Jones. 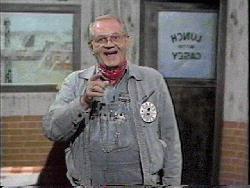 In 1991, Casey put out a video of existing highlights. He was named Outstanding Broadcast Personality by the Minnesota Broadcasters Association in 1995 and inducted into the Museum of Broadcasting Hall of Fame as a charter member in 2001. He was also honored as “Distinguished Citizen” by Macalester College in St. Paul.