TV Times for the week of April 13-19, 1963 featured Roundhouse Rodney on the cover and included part 1 of an interview with Lynn Dwyer.  Unfortunately, I don’t have part 2! 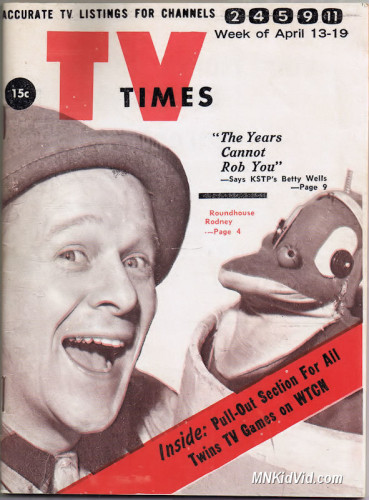 Lynn Dwyer (“Roundhouse Rodney” of WTCN-11), who is only five feet tall, grows much larger as you hear him describe his career, his philosophy, his goals.

This reaction, and it’s surely nothing new that others have not experienced as well, might serve to sum up Dwyer’s character and personality – an energetic, strongly motivated individual, who has, by his own will, turned a handicap into an asset.

Father of two sons, former professional ice skater, holder of two college degrees, a qualified school teacher, and a popular children’s TV star, 36-year old Dwyer has never stood still.  That is, never since he received his “second chance” at the tender age of 11.

That was the year when young Lynn, then a sixth grader, fell ill with rheumatic fever.  He had to drop out of school and spend about six months, most of it in bed, recovering from this illness.

Even before this, Lynn had learned an important fact of his life.

“Because I was small, I always had to overexcel to keep up with the other children,” he says, “but after my rheumatic fever, I wasn’t able to do this so well.  Instead, I began developing a humorous approach.  I figured if I could get them laughing, then maybe they’d listen to me.  Otherwise, I didn’t have much chance of getting my viewpoint across.  But, through the use of humor, I was able to control many situations.”

L:ynn was always popular in  school in his home town of Pittsburgh, Pa., serving as manager of the football team, and president of the senior class.  His flair for comedy made him a natural for humorous roles in school plays.

Always strongly motivated, he regarded his recovery from his boyhood illness as representing “a second chance,” and he vowed never to waste the “extra” time he’d been given.  The illness also sharpened the religious faith, that flowered under the example of his mother.  Lynn’s mother, now in her 60’s, still lives in Pittsburgh, and still enjoys an active life, including bowling, riding, hiking, and various other sports.  Lynn’s father passed away some years ago.  An only brother is an electrical engineer.

Dwyer never doubted he would enter college, “as most members of the family were college educated, and it seemed to me only natural that I’d go too.”  He enrolled at the University of Pittsburgh, where he majored in theater arts with a minor in psychology.  During this period, his career took an important turn.  Inspired by a magazine article about Michael Kirby, who, after a bout with rheumatic fever, had taken to ice skating to build up his body, and went on to become the famous “Ice Follies” star, Dwyer decided to try skating, himself.,

At the public rink near the University campus, Dwyer began skating.   Almost at once, he became highly skilled.  He proved to have excellent coordination, and , entirely self-trained, he was shortly doing complicated figures with ease.  Members of a Pittsburgh figure skating club noticed him at practice, and invited him to join.

“In the group, I noticed a girl to whom I was attracted at once,” Lynn says, “This was the first time I saw my wife.  I didn’t know who she was, but if she was in the skating club, I wanted to join, and did so then and there.”

Shortly after this, he met the girl, whose name was Marion, and whose home had been Duluth, before her family moved to Pittsburgh.  She was still in high school at the time, and as the two skated together, Dwyer learned of her plans to enter Carnegie Tech in Pittsburgh to major in violin and voice.

Their friendship grew, and Marion was among the first to whom Lynn told the news, one day, that he had been invited to join the “Ice Capades.”  John Harris, president of the show, happened to drop by the Pittsburgh arena one afternoon, as Lynn was “horsing around on the ice.  I was feeling extra wild and comic that day, and was taking prat falls, jumping up, and falling again.  Harris saw this and asked me to join his  show.  I was in my senior university year, and told him I could not consider it until I’d graduated.  So Harris signed me up, instead, in the Ice Capades school that was operated in Pittsburgh.”

After graduation, Dwyer received a call to join the show in Dallas, Tex.  He left at once, leaving Marion to finish her college course, with marriage plans to follow.

“The first time I skated for money I was the front end of Pluto, the dog,”  Lynne recalled, describing this first assignment after reaching the show in Dallas.  A month later, he did his first solo role, as well as appearing in pairs, trios, and quartets.  He was a natural comedian on ice, and could fall at will without injury.  “Ice falls,” he explained, “must be done right to get a laugh,  Otherwise, the audience may believe you are hurt, and this is never funny.”  The fine art of comic falls proved to be Dwyer’s forte, and night after night, before audiences from coast to coast, he’d take his nine or more flops, as the arenas roared with laughter.  On tour, Dwyer lived frugally, eating the simplest foods, preferring raw fruits, vegetables, and nuts for their nutritious as well as economic value.  Instead of idling in each city the show visited, he says he tried to learn as much as possible about each community, regarding the tour as an unusual opportunity to learn about this country.

Each week, he saved what he could out of his pay, which began at around $90 a week, and eventually rose to $250.  He was building a nest egg for marriage, and in four years of touring, saved over $5,000, well above the average among his colleagues.

In 1952, right after his fiancee graduated, the two were married.  His wife, also a veteran figure skater, tried out for the show, and was quickly hired.  Also of short stature, she was a natural for the low end of the chorus line, and won the end position on the giant wheel.  It was her job to race after the face-spinning wheel of skaters, and catch on, in a burst of speed, as the last girl in the line.  Any ice show fan knows the suspense of this maneuver, but you may not know exactly how it is staged.  The girl in this last position could, if she really tried, take her place in the line on her first attempt.  Over the years, show management has learned that it s much more thrilling to her miss and then furiously skate to catch up.

Thee show never played in the Twin Cities, during Dwyer’s tours, but finally, when he decided to leave the “Ice Capades, ” in an expected pay raise was not offered – and it was not – the Dwyer’s chose Minneapolis for their home.  He had never been here, but as far back as when eh was a teen-ager in Pittsburgh, Minneapolis had been his favorite city.  “It represented to me the ultimate place to live, a city where thee was economic opportunity in a location so near woods and lakes that I love.  I did  not intend that I would live, spending my Sundays just reading the newspaper, but wanted to be located where Sundays could be spent enjoying Nature.  Minneapolis has always meant this to me.”

“My wife’s grandmother still lived here and  the first thing we did was go out to her house,.  We knocked and knocked but got no answer, although we were sure she was home.  Finally, she managed to opened the door, and we discovered she had fallen on a rug as she started for the door, and , and we shortly learned, had broken her hip in the process.”

They would thus never forget their arrival in the Twin Cities, and the grandmother, who some years later passed away, had a conversation piece that never faded.

NEXT WEEK:  Lynn Dwyer’s career in the Twin Cities and his development of the TV character, “Roundhouse Rodney.”