The Calhoun Beach Manor was the home of WTCN, Channel 11 from the early 1950’s until the early 1970’s.   Lunch with Casey was broadcast daily from the studios, along with other programs including Popeye and Pete, All Star Wrestling, Mel Jass, and What’s New.   Construction on the building started in 1928 but was not completed until after World War II.   The building was originally a social club and converted into a hotel in the 50’s, and a retirement home in the 70’s.   It now hosts an athletic club and luxury apartments.

This postcard dates to the early 60’s. 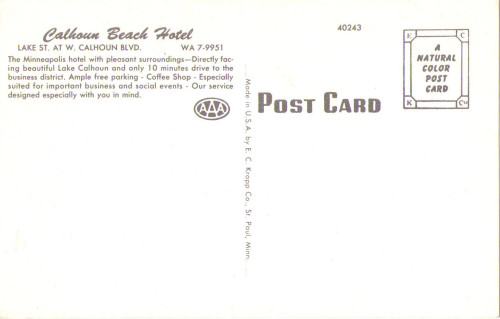