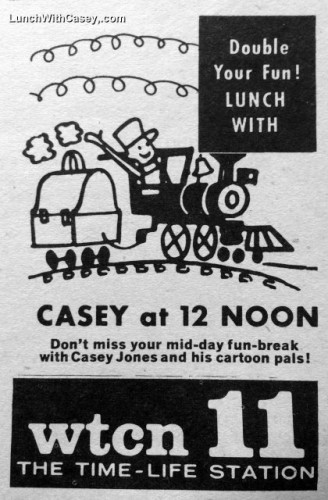 This advertisement appeared a couple times in TV Guide in 1961-62.  At some point in 1961, the Casey Jones program moved from the 5PM slot back to it’s traditional 12 noon time slot.  This is when the show name officially became “Lunch With Casey.”

Casey’s show started in 1954 at noon and held that slot until sometime in mid 1959 when it was replaced by afternoon movies.   Casey had returned by January 1960, but was now at 5PM opposite Axel on WCCO, channel 4.  I’ll have to do a bit more research to pin down the exact time when these changes happened.

Daryl Laub, best known as T.N.Tatters, told me that Casey really owned the 12 noon time slot and that no one could compete with him.