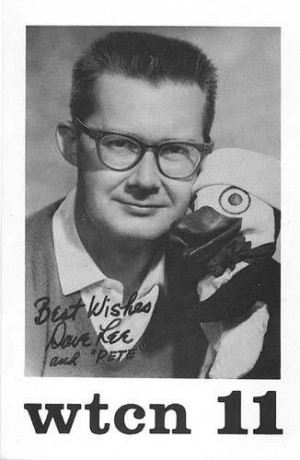 From 1960 to 1970, WTCN had another show featuring a puppet named Pete the Penguin, hosted by Dave Lee (NOT the one who’s on WCCO radio these days).  The show had various names, including  “Popeye and Pete” when they featured Popeye cartoons. Later it was “Dave Lee and Pete” when the Popeye cartoons went elsewhere.   It was even known as “Beetle and Pete” when the show featured Beetle Baily cartoons.    In the end, it was just called “The Dave Lee Show.”   Dave Lee’s puppets included – Pete the Penquin, Omar the Allegator, and Frangrent the Skunk. At one time, Omar was “stolen” and Dave  had to create a new puppet.

There was always a studio audience that got grab-bags full of various kid-related products that got a daily plug on the show when a lucky audience member got to tell what was in the bag for that day. Pete would accompany the kids through the audience and would pull the pony-tails or pigtails that the little girls wore. As a result, it was rare when a girl appeared on the show WITHOUT a pony-tail or pigtails. He did this to girls only, when he would pull the pony tail there would be a funny sound. Then some scout started doing this and Pete went along with it.

Dave Lee’s show actually started on KMSP, Channel 9 in the late 50’s.   Dave and the puppets appeared with Dave’s wife, Pegge, on a show called “Cartoontime at Noontime.”     Here is an ad for Dave’s show on channel 9. Dave is retired and living in San Diego.

Dave Lee Memories is an hour long DVD featuring interviews with Dave Lee and Pegge Forrest, along with plenty of rare clips featuring Pete the Penguin, Omar the Alligator, Fragrant the Skunk and more.