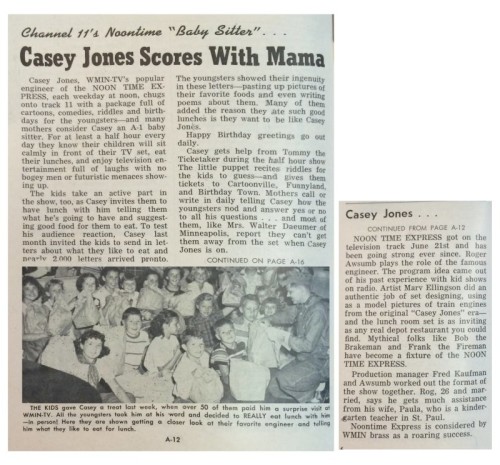 Here is a very early article about Casey Jones and the Noontime Express from TV Guide in July or August 1954.   The program had just debuted in June 1954 and already was very popular.    Casey asked viewers to mail in letters about “what they liked to eat” and quickly received 2000 responses.

Many of the popular features of the show are present.  Casey sent out birthday greetings each day and humor was a big part of the show, along with cartoons.   Joe the Cook, played by Chris Wedes, had not yet joined the program.  He would come along in February 1955.    And Roundhouse did not join until several years later.   The article mentions Tommy the Ticket Taker, which was a puppet of a squirrel who would ask kids riddles and give them prizes.   The squirrel pupped was originally used by Merle Edwards  on the “Merle and the Squirrel” show.   The article mentions “Bob the Brakeman” and “Frank the Fireman”, two characters that are long forgotten.

Roger Awsumb and Fred Kaufman are credited with creating the show’s format, based on Roger’s previous radio experience.    Roger’s wife Paula, who was a school teacher, also provided input.    The lunch room set was designed my Marv Ellingson, to resemble what might be found in a train depot.

Thanks to the Pavek Museum of Broadcasting and their wonderful archives!