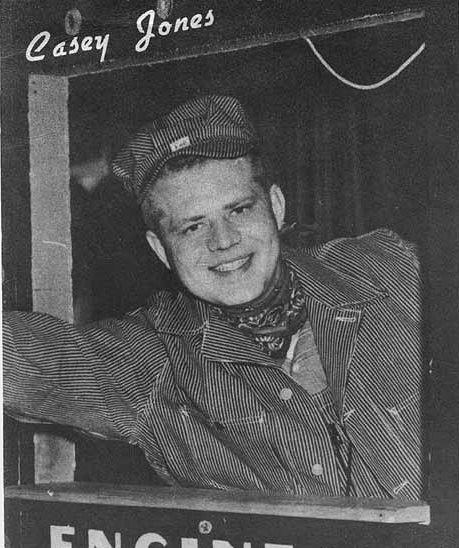 The Lunch with Casey show open began with film clips of a train yard and old steam locomotives.   Over the film you would hear the first verse of the folk song Casey Jones as recorded by Burl Ives.   This was followed by the announcer saying “Casey Jones, now arriving on track 11.”

This song was reportedly written by Wallace Saunders, who was supposed to be a friend of the real Casey Jones. It was later performed in vaudeville by Eddie Newton and T. Lawrence Seibert. The version used on the TV show was recorded by Burl Ives [Decca 29129]. I do not know of any CDs featuring this complete recording. Johnny Cash has also recorded this folk song.

Come all you rounders that want to hear
The story of a brave engineer.
Casey Jones was the rounder’s name,
On a six eight wheeler, boys, he won his fame.

The caller call Casey at half past four,
He kissed his wife at the station door,
He mounted to the cabin with the orders in his hand,
And he took his farewell trip to that promised land.

When he pulled up that Reno hill,
He whistled for the crossing with an awful shrill;
The switchman knew by the engine’s moan
That the man at the throttle was Casey Jones.
He looked at his water and his water was low;
He looked at his watch and his watch was slow;
He turned to his fireman and this is what he said,
“Boy, we’re going to reach Frisco, but we’ll all be dead.”

“So turn on your water and shovel in your coal,
Stick you head out the window, watch those drivers roll;
I’ll drive her till she leaves the rail,
For I’m eight hours late by that Western Mail.
When he was within six miles of the place,
There number four stared him straight in the face.
He turned to his fireman, said “Jim you’d better jump,
For there’re two locomotives that are going to bump.

Casey said just before he died,
“There’re two more roads I would like to ride.”
The fireman said, “Which ones can they be?”
“Oh the Northern Pacific and the Santa Fe.”
Mrs. Jones sat at her bed a-sighing
Just to hear the news that her Casey was dying.
“Hush up children, and quit your crying’,
For you’ve got another poppa on the Salt Lake Line.”

And another version by Pete Seeger