This was a holiday event at North High, promoting West Broadway.   It may be November 24, 1956.    Casey and Santa arrive in a helicopter. 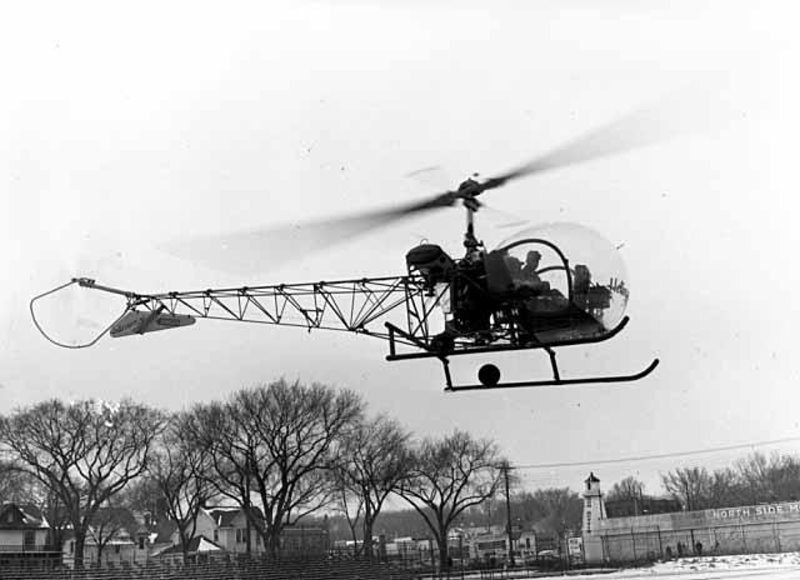 And they posed for photos. 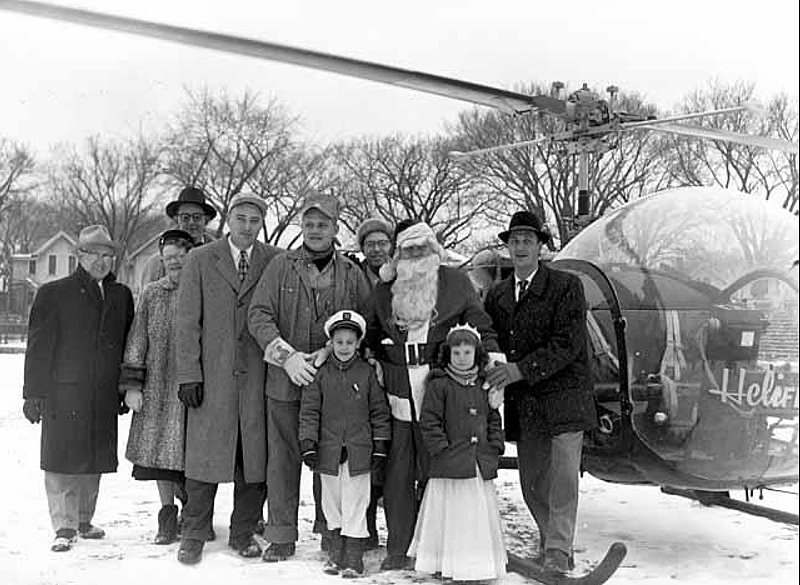 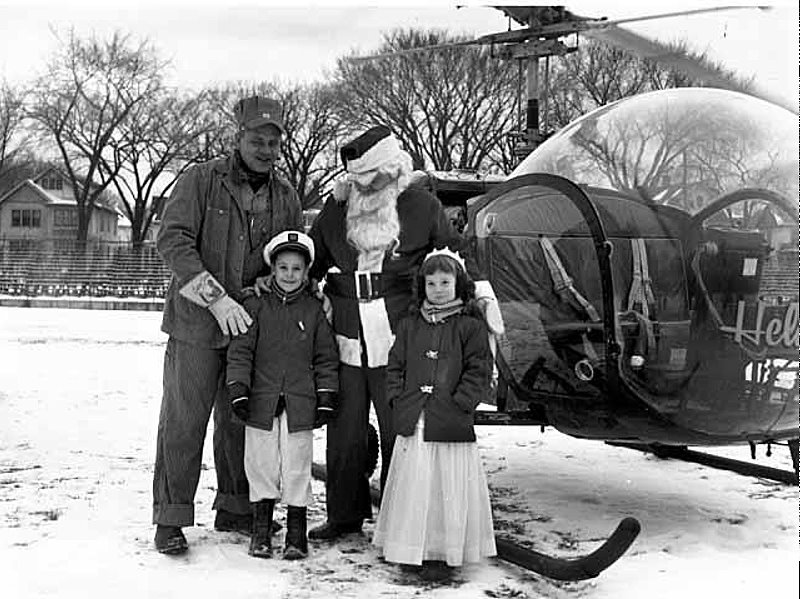 Lots of kids and parents in line for Casey and Santa.   According to a newspaper article, there were 4,500 kits here. 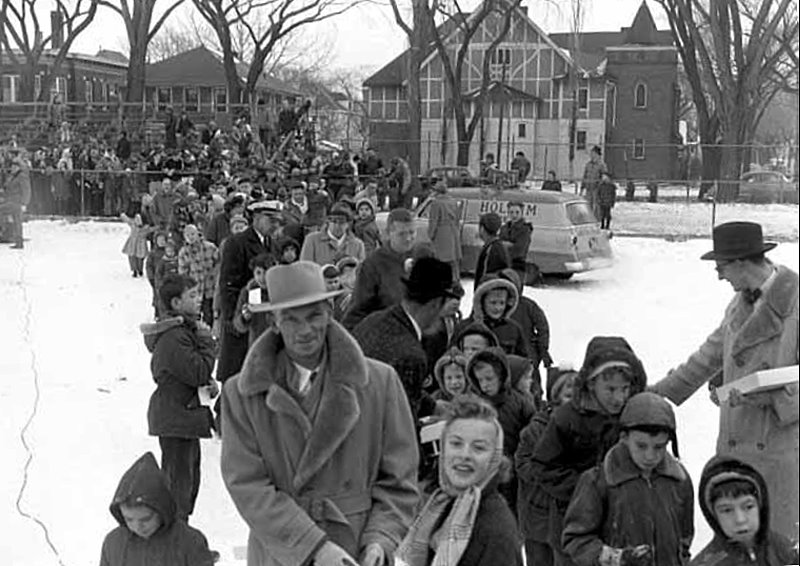 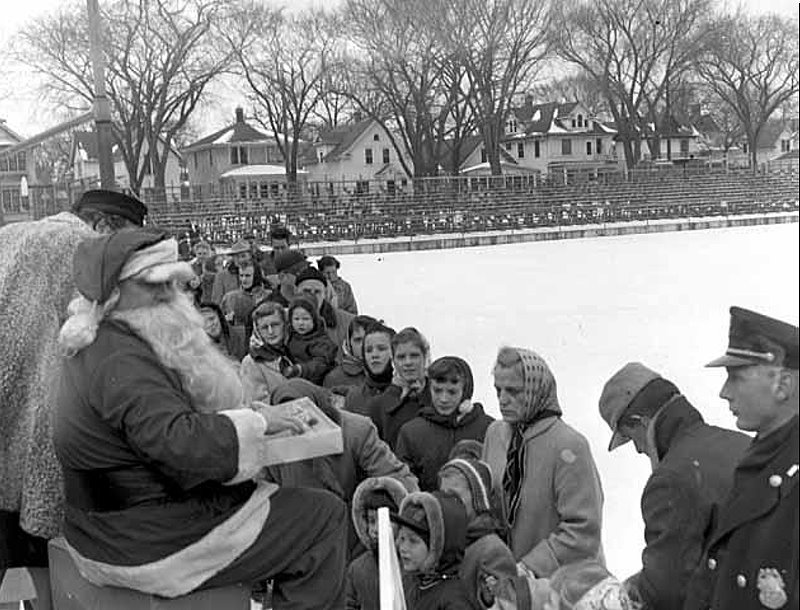 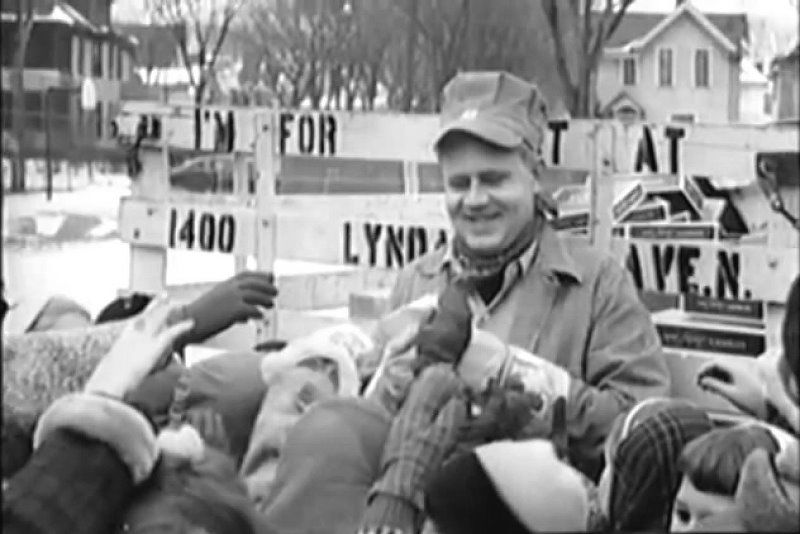 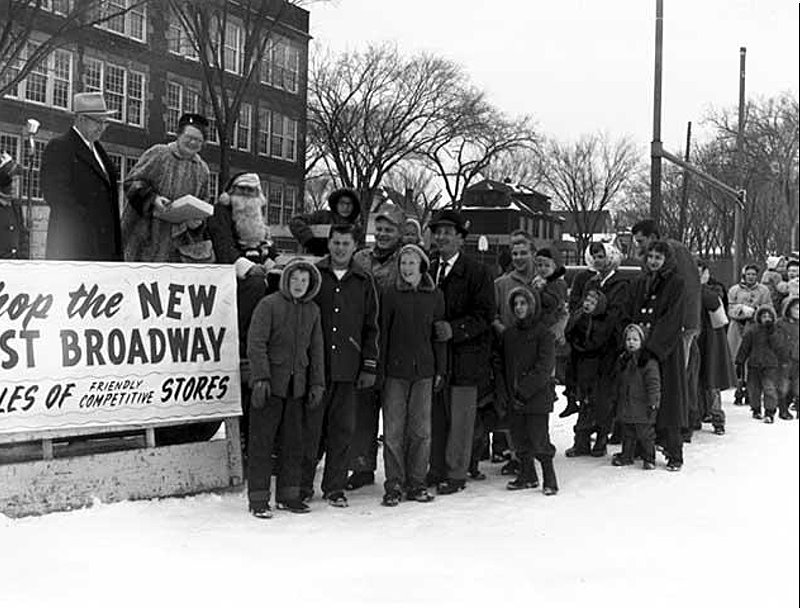 According to the news paper article below, Joe the Cook was also here.   Two kits were winners of a Casey Junior contest to spend a day with Casey and Joe and appear on the show.   You can see photos of that day on this page

Thanks to Larry Iverson for this newspaper article.

The air was crisp, the morning clear. And Santa came to the North Side by helicopter. A crowd of 4,500 packed the bleachers and hung on the fences of North high school’s athletic field last Saturday, Nov. 24, amused by the antics of Casey Jones. Promptly at 10:30 a dull, quick paced sound brought all eyes skyward as Santa’s helicopter hovered over the field. Old St. Nick’s bright red suit was easily seen through the plexiglass bubble on the front of the plane. Quickly landing, Santa was escorted to the stand by members of the West Broadway Business association as 4,500 people (most of them kids) made a bit more noise than you would have thought possible. After giving our junior queen and commodore a special hug, Santa begin to distribute the several hundreds of pounds of candy he brought from the North Pole. As the candy line formed, the 50 fortunate youngsters who asked WTCN’s disc jockeys for their free helicopter ride tickets were brought on to the field to await their turn. Taking the children in groups of three, the big plane darted quickly from the group, climbed to 500 feet in a graceful arch, danced lightly overhead, and then swooped down to the ground. As your Post reporter saw the kids leave the plane with big smiles, he swallowed his pride, reached deep in his pocket for the ticket he thought he’d never use, and patiently took his place in line. Yes sir, Santa has the right idea! If a man is going to fly, let him do it in a helicopter. Just about the time everyone had their fill of candy, a place escort brought Joe the Cook on to the field. After much bantering between Joe and Casey, the kids crowded around as Joe drew the name of a boy and a girl from a big barrel. With a handsome flourish he announced that Larry Iverson, 3438 Lyndale ave. N. and Linda Collier, 2231 4th st. N. were officially designated as West Broadway’s Casey Jones Juniors. These two kids will be given Casey Jones outfits, spend a day with Casey, appear on his television show, and be given pictures of themselves with Casey.