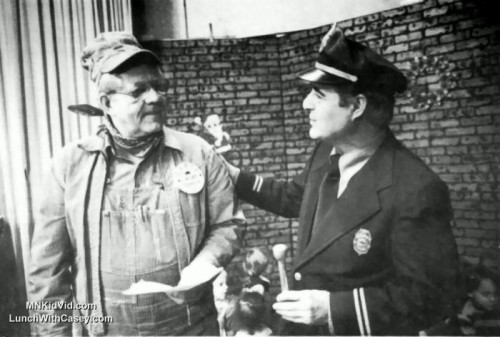 In 1985, Roger Awsumb and John Gallos appeared as Casey and Clancy together in a Christmas program on Anoka’s Ch. 12 public access station.   Joel Larson was running audio for the show and provided a little description of the program in a newsletter for the station.

There’s a cop and a train engineer standing by a Christmas tree, a little green elf off left busily going over lines, a bunch of little kids and a crew, in place and ready to go.  The show gets rolling.  Casey keeps roaring into his mic and blowing out the VU meters; and we had some trouble picking up the Christmas tree (he had lines too). The show really hops along, though, and I;m thinking, “Wow, it’s nice of these guys to dress up like clowns and put on a show for everybody.” How was I to know they had done it a hundred million times already?

Roger and John were old friends, despite having worked at different TV stations.   They had both attended Macalester College together and John had give Roger his first job as a floor director at WCCO.

So now I have to ask, does anyone have a tape of this program?   Anyone have connections to ACCW – Anoka County Communications Workshop?   Anyone know anyone that helped out there in the mid 80s?