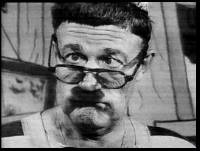 Clellan Card’s “Axel and his Dog” gets considerably more coverage than Casey, even though Casey was around a lot longer.    The show ran for many years on WCCO.

Axel had a little toothbrush mustache. He also talked in an exaggerated Swedish accent, which was a hoot! When he passed away, “Carmen the nurse” (Mary Davies), who was his sidekick, inherited the show. For a little more on Axel, visit Julian West’s website, Axel’s Treehouse.

A book called Lost Twin Cities featured a chapter on Axel, and the public television series based on the book featured a segment on Axel.    Be sure to read Julian West’s great biography of Clellan Card.